Historians often talk about ‘the archive of the feet’ or the idea of ‘psychogeography’ each of which can help us understand the people of the past by tracing their footsteps. There are excellent books about this idea such as those by Tim Ingold, and even better books that study a region in this way such as Tim Robinson’s Stones of Aran. But life in the past was far more watery than many such books recognise: before roads and rail, routes of trade and travel were often coastal rather than inland. And for anyone wanting to explore unfrequented places and forgotten histories, self-powered boats are wonderful tools. They make places accessible, such as caves, shallows and rocky islands, where few other vessels can land: 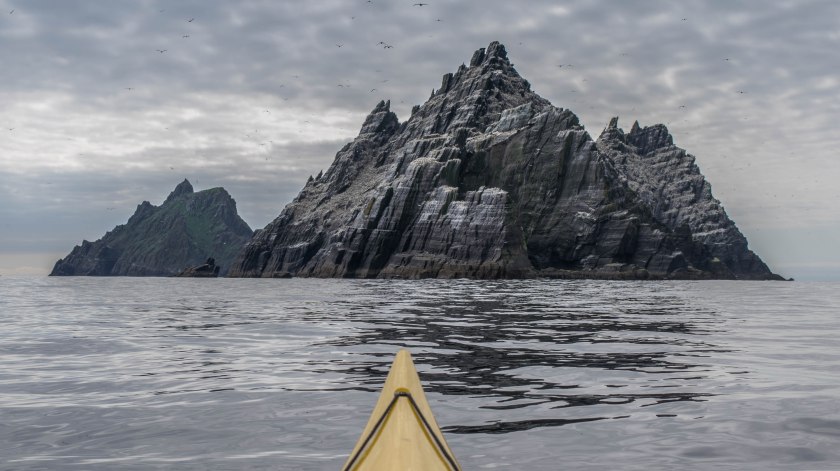 So kayaking means, more than anything, freedom. There is, admittedly, the small matter of the ocean to deal with. But that’s the true, free, joy of kayaking. The ocean is far more changeable and capricious than anything on land: every journey on it is entirely unique, from the stillness of the pictures above, to the days that give thousands of views of infinitely various waves from the inside…

When miles offshore, the sight of another human across rough seas (with no possibility of interaction) can provoke feelings of the most extraordinary loneliness: 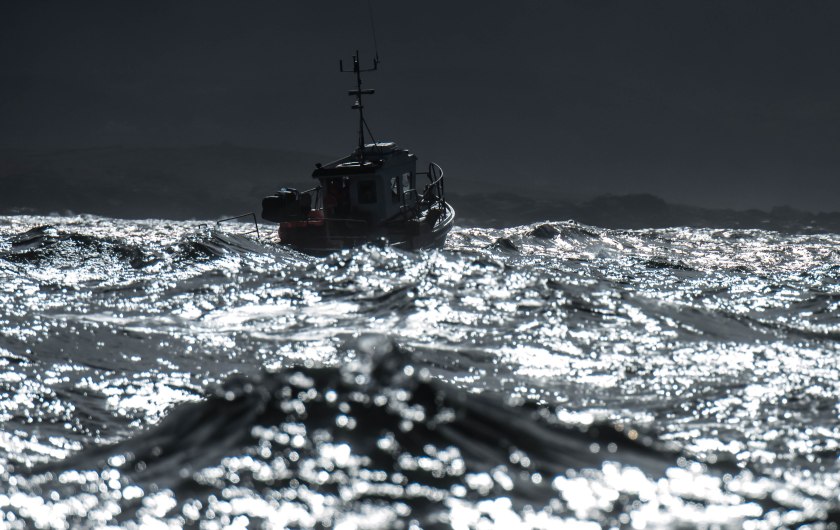 …but the rewards are rich enough to make the risks worth it. There’s something magical about nights after 12 hours spent moving like this…

…when the body remembers the movements long afterwards – and sleep is filled with dreams of dolphin-like movement.

I started kayaking ten years ago, and Llinos Owen (the person in many of the photos) and I soon shared five boats, each suited to different interactions with the ocean. The first is the long yellow sea kayak in most pictures on this site (an SKUK Explorer HV) which is built for speed on long journeys, laden with kit; the second is slightly smaller and lighter (an SKUK Romany, the red boat at the top of the page & in the video, my favourite on really rough seas but less good for long expeditions); the third is 6ft smaller (11.5 ft) – the ‘Rockhopper’ in the photo above, not as fast for long journeys, but so robust it can be beaten against coastal rocks with abandon; the fourth & fifth are tiny surf kayaks (a Mega Bullitt & Necky Jive, just 9/8ft, the latter in the photo below) purely for entertainment among the waves.

Llinos now trains with the Team GB Paralympic Squad: for the full story of how & why we got into kayaking, & where it has taken us, see this blog post.

One of the great appeals of kayaks is that they make perfect floating wildlife hides: not just history & geology, but nature too is different when seen from small & silent boats. As a kayak floats by, otters don’t flee but stop & stare, even from a metre away:

Dolphins encircle you like enemies in an old western (without the hostility): 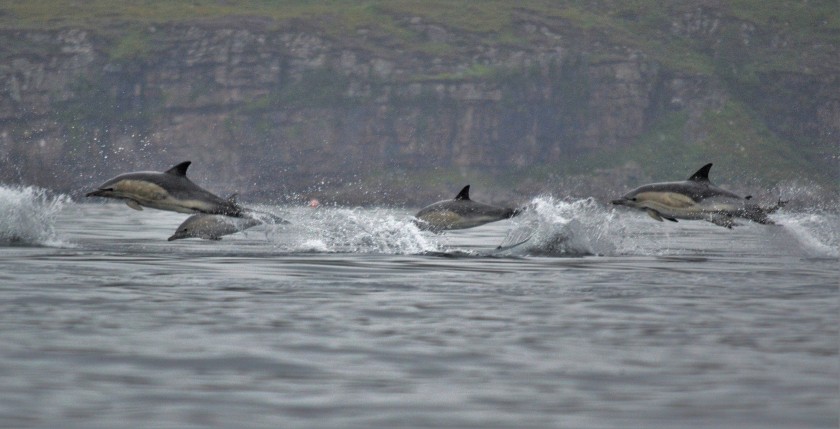 And sometimes the sky becomes so full of life that it’s impossible to focus on anything else: 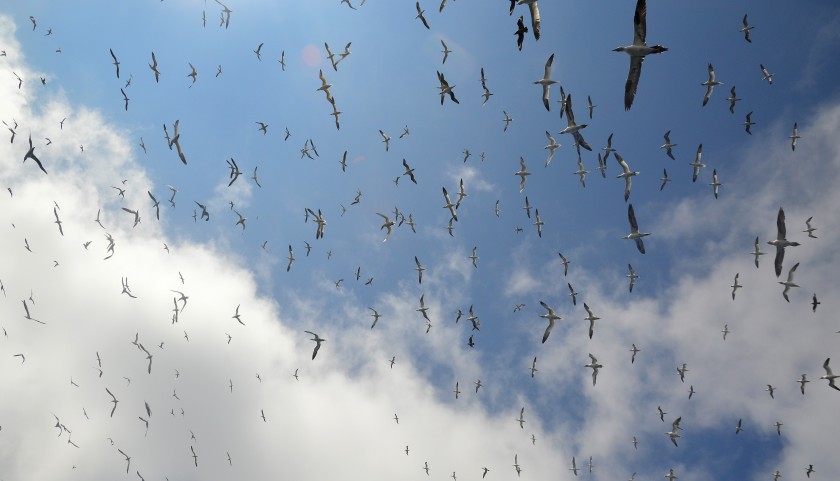 There’s ocassionally a rarity – like a long-tailed skua or little auk – along the way:

Again & again, a kayaker will be in touching distance of wildlife that would never willingly come close to humans on foot:

For me, this feeling of melding into the natural & historical world – finding my relationships to life & time changed – as well as the sensory world (nowhere smells the same from the sea), is the main appeal of a kayak.

It’s no surprise that since the 1890s people have been writing of sea kayaking as ‘the next big thing’. Books from the 1930s, the 1980s & the 2000s all assumed that, with hills becoming overcrowded, and landowners losing patience with walkers, sea kayaking will become a vast outdoors phenomenon. The 1970s were a moment of remarkable expansion, with the founding of kayak clubs & symposia & the realisation among kayakers that they were no longer alone. To anyone who kayaked at that time it must seem like sea kayaking has become a mass-market phenomenon. Yet outside a few spots where kayakers tend to congregate (Anglesey, the Cornish coast) it’s incredibly rare to ever see another kayak on the water.  Justified fear of the immense forces of tide & swell prevents the boom into a mass pursuit ever really happening. The danger can never be entirely mitigated (confronting the unmediated force of a power far greater than oneself is, after all, part of the appeal) but there are now dozens of organisations that can give anyone a helping hand onto the water. Look on the next page – kayaking links – for more details.

I only took this hobby up after Llinos had a car accident which stopped us heading into the hills together (we were partners at the time). I was initially terrified of this new world we were entering. And on the (many) days she takes a fancy to an offshore gale, when walls of water hit us like advancing tenement blocks, I still am: