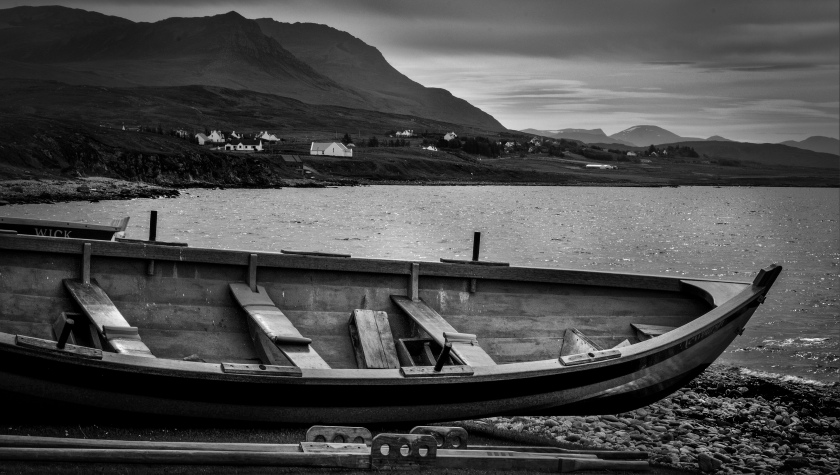 Afloat: Small Boats & Sea Spray is a new book project for Harper Collins. It uses traditions of boat building, travel by small boat, and the stories and folklore of coastal communities to explore the ocean-going cultures of the North Atlantic. Its chapters cover South Connemara and Fair Isle, then regions of Faroe, Greenland, Newfoundland, Maine, the Carolinas and the Caribbean to form an arc from the NE end of the Gulf Stream to its origins five-thousand miles to the SW.

This is the first of my projects to involve portrait photography as well as landscape and nature photos, and in moving from my modern kayak to traditional wooden boats, the aesthetic will move from the bright colours of The Frayed Atlantic Edge to monochrome. Although the project hasn’t started yet, there are the beginnings of a gallery here. Afloat will generate a record, through images, archives and oral history of the people and places that carry maritime tradition into the future, at a time when new relations of land and sea challenge the terrestrial complacency of the last two centuries.

I’ll be travelling for Afloat in 2021, so am currently planning the journeys. I’d love to hear from anyone with an interest in small boat traditions. As a first step, I’ve put together a draft of a questionnaire for boat builders, which will need further development but can be found in its first form here: Afloat Questionnaire. At the same time I’m building a list of resources for researching small boats. If you can provide answers to the questionnaire or suggest ideas for resources and reading, please do contact me either at d.j.gange@bham.ac.uk or on twitter @david_gange.

I’m also currently working out how to do crossings for this project by ship, minimising the number of flights; if you’re able to offer advice (or even assistance…) please do get in touch!

What follows, below, is a brief first draft of the book’s purpose…

There’s something uniquely evocative about tiny boats afloat on oceans. Despite their fragility, these small shells of wood, seal skin, cow hide or canvas can cross vast seas in any weather. In isolating their occupants amid the mightiest forces on the planet they reveal humanity at its smallest and most delicate. They immerse humans in the wild worlds of whales, sharks and shoals that are, despite their size and charisma, among the least understood species on our planet. They spell adventure and exploration – but also risk and hardship – on exceptional scales. Carried for centuries by forces like the North Atlantic Drift, which saw rumours of Greenland kayaks, like Caribbean seabeans, appear on European shores, they illustrate the interconnection of a vast oceanic world.

But small vessels aren’t all about solitude amidst immensities: they’re intense social settings. When a few people set out in one boat they have just songs, stories, and the rhythms of sea, work and weather to occupy their time. No wonder the folklore and poetry of boats is legendary: from Shetland to Belize whole genres of storytelling have emerged from the tales once told on long rows into oceanic dawns.

Historians now recognise small boats as far more important to world history than was once assumed: theories of past migration long relied on ‘land bridges’ by which early peoples walked between landmasses. Only recently have our most distant ancestors been revealed as more sophisticated seafarers than our ground-based society had imagined. There is growing evidence that, later (although still when the wheel was a barely functional technology), vast trade networks were plied in dugout canoes; these spanned regions from the Caribbean to Nova Scotia and the Great Lakes. Yet, like the seafaring of our earliest ancestors, their existence was long denied by writers who assumed that small-boat stories could only be footnotes to the real histories. Today, marginalised stories play out once again in the small boats that carry migrants and refugees on convoluted voyages from Venezuela to Haiti, or Syria to northern Europe.

This book is the story of a journey around the Atlantic in search of the lost and living histories of small vessels. Beginning among the currachs and hookers of Atlantic Ireland, it travels north via the sixareens of Shetland and Faroese trybekkur to the kayaks, umiaks and birchbark canoes of Greenland and Atlantic Canada. Then, approaching the opposite end of the gulf stream from its starting point, the book explores the Dories of Maine, immortalised by the art of Winslow Homer, and the diverse pirogues and skiffs of the Carolinas and Caribbean, which mixed the influence of Arctic and African styles in some of the most eclectic and revealing vessels on earth. From the centrality of canoes to first nations’ thought, to Rachel Carson’s inspiration on voyages along the coast of Maine, to the water-borne views of Barbados and Martinique in Kamau Brathwaite and Edouard Glissant, thinkers from each region provide ideas and perspectives that reveal the history and philosophy of worldviews from within the wave.

The journey finds traditions of the everyday boats that made island societies viable; it recounts tales of exceptional small boats that crossed oceans or made first contact between societies; it invesitgates why some boats, such as the Galway Hooker, have found new niches in the modern world while others, such as the closely related Bád Iomartha, face extinction. It explores the worlds of today’s leisure boats, in which the traditions of the Greenland kayak and the rowing skiff inspire some of the fastest growing outdoor pursuits on the planet; and it raises the contemporary histories of migration, in which small boats are once again the vessels of last resort for those displaced by our fractured politics. The journey places water at the centre of culture; it offers unique perspectives on the nature of island living and the island nature of Atlantic societies such as Britain and the Caribbean. It shows how Atlantic littorals have been geographic units of far more historic significance than any nation or continent.

Each chapter of Afloat is formed around a journey by boat, drawing on local maritime expertise from the region in question, and exploring the geography, literature and history of a specific stretch of coast or archipelago and its distinctive small boats. The boats chosen are all vessels that can be rowed or paddled with a crew of ten or fewer; some have sails, but a criteria for their choosing is that they also travel under human propulsion of oar or paddle rather than only windpower. (One reason for this is that, contrary to general preconceptions, wherever historical statistics exist we find that rowing/paddling boats dramatically outnumbered sailing boats: for instance, in Ireland in 1836, the year of the first fisheries survey, 73% of boats were open rowing vessels, only 2% decked sailing craft). It is crucial to the book’s outlook that the world is viewed from these boats: intricate details of water, nature and shoreline are the blocks from which bigger histories are built.  The sense of being adrift in larger forces is what gives those histories emotional force and makes them parables for our present.

The book begins from the observation that maritime and oceanic histories deal almost-exclusively with large ships. This tends to favour particular stories and particular people (for instance, Europeans in Canada, rather than first nations peoples, whose seafaring was far more sophisticated, but whose boats were always small).  At the same time, there are still almost no histories of specific small boats; remarkably, there is not even a general history of a vessel as familiar and widely used as the kayak. In our current moment, when the fate of human societies is demonstrated to be tied to that of the oceans, revealing our cultures’ oceanic pasts is both deeply necessary and profoundly evocative.